Home / Exhibitions / Concluding concert of the masterclass by Michael Frischenschlager 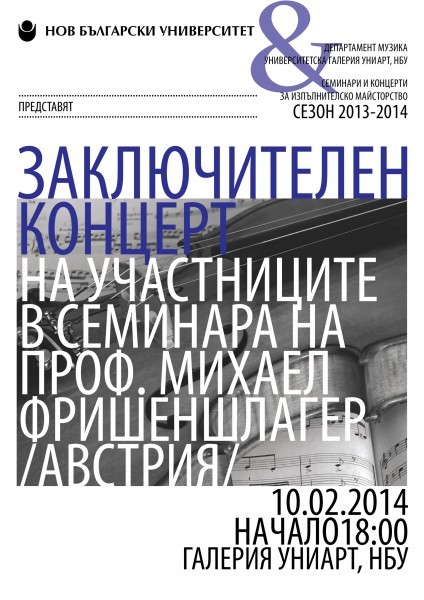 Concluding concert of the masterclass by Michael Frischenschlager

Soloist, chamber musician, violin pedagogue from Salzburg, Michael Frischenschlager is descendant of a well-known family of musicians of long tradition. He studied violin, conducting, musicology at the  academies and universities in Salzburg, Köln, Wien and Roma. His violin teachers were Theodor Müller, Andrè Gertler, Franz Samohyl and Yehudi Menuhin. In 1971 he began to teach at the University of Music and Performing Arts of Vienna. In 1984 he was elected Head of String Department, 1989 vice chancellor, 1992-1996 chancellor of the University of Music in Vienna. Since 1989 he is president of the International "Fritz Kreisler" Competition in Vienna. In 1991 he founded the International Summer Academy Prague-Vienna-Budapest at the Vienna University of Music and Performing Arts and has been its director for 14 years. For many years he has been President of the European String Teachers Association in Austria (ESTA) and Committee member and Vice President of the World Federation of International Music Competitions (WFIMC).